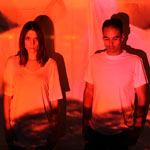 The name "Bavaria" comes from both artists sharing a commonality of similar childhoods that tie them to the Bavarian region in Germany. John Tejada, son of an Austrian father and American mother, came to the United States from Vienna, Austria at age eight. While Kimi Recor, daughter of a German mother and an American father, moved to the United States at age twelve from Bad Aibling, Bavaria. The two flourished in the musical arts, developing extensive backgrounds in musicianship, songwriting, and live performance.

John Tejada is an electronic musician, producer, DJ, and multi-instrumentalist with an acclaimed resume of releases to his credit. Having founded his own Los Angeles based record label Palette Recordings, he has produced a multitude of catalogue hits since the label's early beginnings in 1996. His most recent accomplishments include the single "Somewhere" (2013, Kompakt), a full-length album entitled "The Predicting Machine" (2012, Kompakt), and a series of collaborative EPs.

Kimi Recor is a vocalist and multi-instrumentalist who has recorded and toured with numerous bands over the years. Draemings, her current solo project, illustrates her immense talent, both sonically and vocally, for astonishing listeners by defying expectations. Her voice is of a singularizing purity that remains untainted by most associated trends heard in contemporary vocalism, and it has an emotional drive that resonates with honesty.

Tejada and Recor have a musical partnership that spans over a decade. Their first project was on John's album "Logic Memory Center" (2004, Plug Research) where Recor provided vocals on the track "Strange Creatures." Recor also appeared on "Stabilizer" from Tejada's "The Predicting Machine." Over the years, they have recorded numerous pieces together between their own primary projects and finally realized that it was time for them to commit their efforts to a serious collaboration for a full-length release.

Bavaria's sound is a highly crafted experience that pushes minimalism beyond its limits by blending Tejada's use of his modular synth and Recor's vocals. Although both could have easily layered their recordings with multiple instruments, they decided to omit live drums and guitars altogether and allow the uncertainty of modular synth patches to evolve and guide Recor's voice. The result is a colorful journey that captivates listeners upon first exposure and sets itself above an otherwise grey musical landscape so commonly traveled by today's releases.