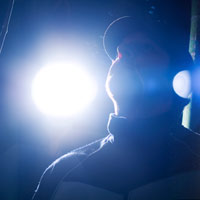 United States
From 1995-2005 Mike Cadoo crafted some of the most forward-thinking music available as half of the post-industrial/IDM duo Gridlock. Few could claim a more visceral, workmanlike approach to electronic music in a scene deluged by laptop upstarts. However, by 2004, the balance between personal fulfillment and external accolades had shifted. In surveying the unending pursuit of “future music,” Cadoo realized that a personal retreat was due. And so by re-embracing his love for live instruments and raw expression unhindered by the demands of trainspotters and gearheads alike, he formed Bitcrush.

Although 2004's Enarc differed minimally from Gridlock, 2005's Shimmer and Fade announced a meld of shoegaze fuzz, pop drumming, faded vocals and epiphanic structures. Jittery beats now bowed to truer rhythms while complex synth lines were retraced along the necks of distorted guitars. This sound climaxed on 2006’s In Distance—an album that created a unique space for followers of Slowdive, Lush and Mogwai to seek agency with fans of Swans or Sigur Rós. With Bitcrush, the aim had been soundly reset from the head to the heart.

While no less the skilled programmer, Cadoo then advanced to his "rock" album—2008's Epilogue in Waves—in which analog instruments were favored over electronics. The title was also meant to be literal. With the birth of his son in 2006, priorities had shuffled. Stretched thin by running the n5MD label, a mailorder business and the travails of any adult life, Cadoo felt that the role of musician was one too many to ensure family time. For someone who wears his emotions on his sleeve (even if that sleeve is rarely black), it felt right.

Only later, after seeing Sonic Youth with their children in attendance, did Cadoo realize the necessity of remaining true to himself as a musician and for his son to grow up knowing him as one. With this newfound vigor, Cadoo embarked on Bitcrush's most spacious release yet—2010's Of Embers. While no "ambient" album per se, Of Embers sets a much earthier and echoing foundation with some cuts eclipsing fifteen-minutes. The walls of sound now seem more tidal; the rise and retreat of each layer more natural. Whether this broader compositional approach stems from the broadening of Cadoo's own life, or merely the evolution of a veteran composer reaching for new heights is as unknown as it is irrelevant. Now more than ever, it simply is what it is.