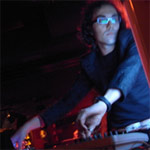 Spain
Crisopa is the name in which Madrid based Santiago Lizón has chosen to release his music under. This project Of Lizón's first saw the light of day in 2005, when all his influences of that time, IDM, shoegaze, post-rock and classical musics shaped his output into a more coherent creative entity. Crisopa has evolved in parallel with the netlabel scene of Madrid, as Lizón has released several quality works on netlabels such as Plataforma-ltw, Persona-isla, Add-sensor and Escala before signing with stateside imprint n5MD. Crisopa's music has been described as blissful, dense, melodic and emotive. In it, the layers of guitars, pads, voices and intricate rythms are combined to frame a particular travel from one landscape to another. This is done by Lizón's adeptness in displaying nostalgia, hope, transcendence, and melancholy all with a sense of confidence and humility. More recently Lizón's music has been further shaped by his musical contributions to short-films and documentaries in his native Spain.