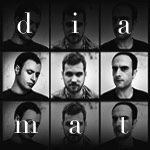 Italy
Diamat was formed by Attilio Bruzzone (co-founder and composer of port-royal) and Andrea Zangrandi during port-royal's tour of Russia in the fall 2011. On one of those intense Siberian nights, the duo decided to work together while on tour to produce some early demos. Soon, in December 2011, they were joined by Attilio's long-time close friend Christos Garmpidakis (dergar), who completed the line up. After more than a year of on and off work on 8 selected tracks among the huge amount of material already produced, the band delivered to the n5MD imprint their debut album called "Being Is The Sum Of Appearing", which is gonna due to be released in the summer of 2013. Diamat's music is deep and lush melancholic electronic music which nods to ambient-techno. Diamat is the fruit of the combination of these 3 friends, who, together with a musical dialectic, share both a passion for music and philosophy and more importantly a common vision of musical aesthetic and life.