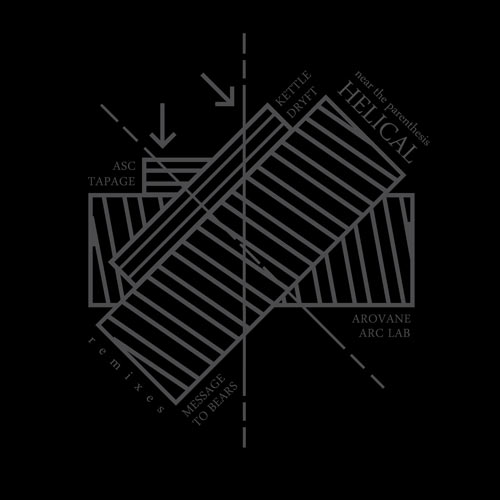 MD249
Helical Remixes is the absolute companion to Near The Parenthesis' album Helical. The original album was released this past spring. Shortly before the mastering session label owner Mike Cadoo asked Tim Arndt for stems to the track Hand Off. A week later a Dryft remix was completed. This remix was originally to be included as part of the download bonus material for the album. However, it luckily inspired the idea to curate a remix album. Arndt brainstormed a short-list of his 'must haves' and Helical Remixes was born.

Seven remixes from artists that are truly adept at their own forms of electronic music. Kettle starts of the release with a light and bouncy IDM rendition of Four. The title track run through the Message To Bears indietronic filter. Lyra by Arovane gives a hint at what an Arovane / NTP collaboration might sound like. ASC gets intense with his dark and beaty rendition of 0402.1953. Tapage shows us his more ambient side for his take on Notation. The aforementioned Dryft remix mashes up ambient composition with his bastard appropriation of garage. Arc Lab then closes the album down with his stylistic approach to the original album closer Reunion. Remix releases can often pail in comparison to the original. Helical Remixes clearly stands tall next to its archetype. Learn more about Near The Parenthesis
bandcamp
Spotify
iTunes

other n5MD releases from Near The Parenthesis