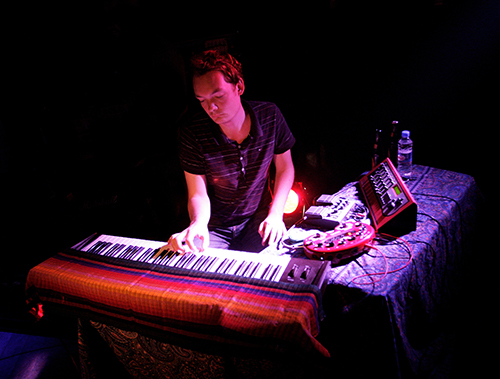 Denmark
Aerosol is Rasmus Rasmussen from Copenhagen, Denmark. Rasmussen started his electronic solo project in 2000 while working with Jonas Munk (Manual), Jakob Skøtt (Syntaks) and Jess Kahr in the post-rock band Limp (Morr Music). His self-titled debut EP was released on Active Suspension in 2001, followed by a handful of compilation appearances on various labels, all displaying a minimal and intimate sound. In 2006 Rasmus teamed up with the Unlabel imprint to release his first full-length "All that is Solid melts in to Air" (reissued on n5MD in 2011, including some of Rasmussen's compilation tracks). In the same period he began playing live shows with Manual and Syntaks, materializing in the cosmic impro-album "September", issued by Benbecula in 2007. The second solo album "Airborne" was finished in 2009, leading to a contract with Oakland based label n5MD, who released the record later that year. Keeping the already familiar sense of moods and melody intact, this album shows Aerosol exploring a more expansive sound with guitars in focus and elements of shoegaze and psychedelia brought into the mix. By this time Rasmussen had joined his old Limp mates in psych collective Causa Sui and begun spreading his musical efforts out as a keyboard player in various constellations, playing concerts or recording with Øresund Space Collective, Kloster, F. E. Denning Descension Orchestra, Keith Canisius, El Paraiso Ensemble, Ron Schneiderman and Faust. A solo concert in early 2013 kicked off work on the third Aerosol album, which sees Rasmussen injecting solid amounts of analog synth tapestries, cascading guitars and swirling effects into the signature Aerosol sound, giving his ethereal music an added depth and dexterity, with obvious allusions to the cosmic synth music of the seventies. The final touches on the album was done in summer 2014, and the album then released by n5MD in the spring of 2015.